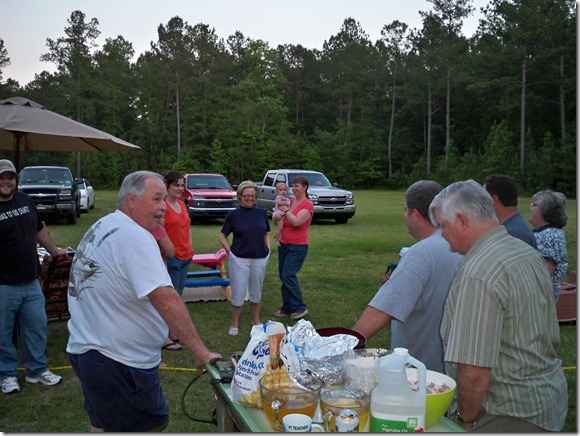 On Saturday April 30, all of the guys that shot birds at Springrove got together with our families for a quail fry. It was a great time of fellowship. We met at Bernie’s house. Bernie fried the quail and some French fries. Joe cooked cobbler and cornbread in the Dutch ovens. Mickie cooked a pot of grits. I helped out wherever needed. 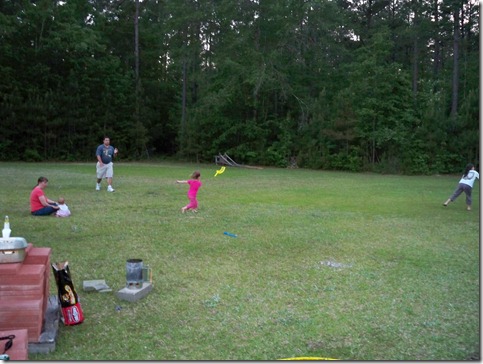 While the cooking was going on, the children played in the yard. All of the small children of the Briary River bunch were there. They ran, played on the swing set, and played ball. They had an all around good time. Joe took time out from cooking to go around and take a lot of pictures. I think he was having as much fun as the kids.

Mickie was the only woman not to get out of cooking. But it didn’t take her long to get the grits going. Then the women sat back and watched the men cook, catching up on the latest news. I think they enjoyed the fact that they were not responsible for the cooking (for the most part.) 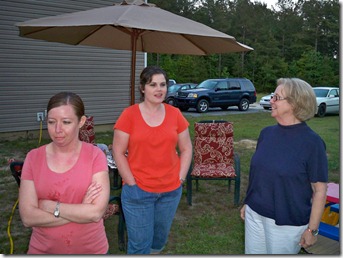 Of course you realize that when men cook, stories and lies get told. Of course we here at Briary River don’t lie, we just stretch the truth, just a little. Many stories of the quail hunt were retold. Joe likes to tell a story about killing a bird by hitting it with the barrel of his shotgun. Everybody else likes to tell the story of Joe shooting one out of a tree. I like to point out the fact that I didn’t miss, I didn’t. Well, not much anyway. What’s the truth? The truth is that all the stories did what they were supposed to, they brought about laughter. 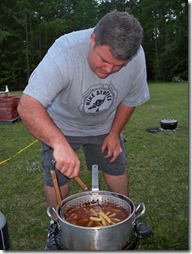 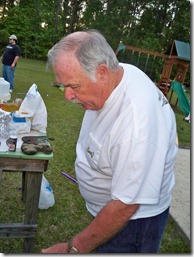 We cooked half of the birds we brought back from Springrove. That was entirely too many. With the grits, fries, cornbread, cobbler, and ice cream, everybody eat more than they should have. The cooking was a learning experience. We had never cooked birds like that before. Everything turned out well. I think there is room for improvement, but then if everything is perfect, life gets kind of boring.

We usually get our families together about once a year and have a big supper. Usually we go to a restaurant. It was much more fun this year cooking at Bernie’s house. We got to watch the kids play. We were able to make alterations to our hunting stories around the cook pot. The best part is, we have enough birds in the freezer to do it two more times!

Friends, food, and fellowship. Having fun, The Briary River Way.